This was due to a few reasons:

There was no design choice – They were either white or black and in a couple of styles
They were noisy
They had limited speed settings
They were not aesthetically pleasing.
Air Conditioning systems became cheaper over time
Air conditioning options became more effective and cheaper to run over time

However, all was not lost for ceiling fans as newer designs, colour choices, lighting options and different material options are now available.
They are also now making some design trends more cohesive such as an industrial look when teamed with stainless steel fans and exposed roof beams or a tropical vibe when you team up a wide wooden blade 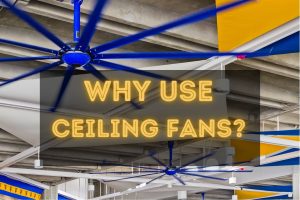 The Benefits That Ceiling Fans Offer

Home owners are starting to realize the importance of having a ceiling fan, which include:

The only negatives about ceiling fans when compared to air conditioning are:

They don’t actually create cool air. They circulate air and this air as it hits warmed skin has a cooling effect
You have to be in direct air flow to feel the benefits of a ceiling fan
You cannot control the temperature
You will need several fans to cover a large room.

Are Ceiling Fans Cheap To Run?

A split system air conditioner to costs around 33c-40c an hour to run.If you had it running 8 eight hours a day, for the month of January, you could expect that unit to cost nearly $100 in electricity usage alone plus add in the installation cost by a licensed electrician, and ongoing air con cleaning and maintenance costs and unit costs also adds to this total.

Ducted Air conditioning is more expensive, running anywhere from $1.48 to $1.94 an hour.
Plus add the installation and ongoing  maintenance costs

Split systems can set you back from $500-$2,000+ in price plus the labor installation cost, and then the ongoing maintenance and new filters and cleaning costs

When installing air conditioning, you’ll have to weigh up whether the cost to benefit ratio is worth it.

A ceiling fan can cost as little as 2c per hour to run, which makes them an affordable cooling option. This allows you to run them for longer, and at less cost than an air conditioner. A ceiling fan can cost 20 times less to run than a split system air conditioner
The price of a fan can start at $60 with an additional 1 to 2 hours of labor to install it.
There are no ongoing electrical maintenance costs and a fan should last for at least 10 years.

Install A Ceiling Fan Outside

Our love for living as much as possible outdoors means that we also want cooling options outside.
More and more patio and deck areas are having outdoor ceiling fans installed.
Newer fans are now entirely plastic which stops corrosion from happening.
A fan moving air around under a patio makes it a comfortable place to spend time in summer
The airflow from a fan is also a deterrent for bugs such as fly’s, mozzies and the dreaded midges

You will need to ensure that your roof is high enough for a fan to be installed and you may need several fans to cover a whole area.

Installing a Ceiling Fan With a Light

Ceiling fans can be dual purpose in a room that needs extra light as they can come in a variety  of lighting options and they are sleek and modern designs. They are no longer the ugly glass light fittings from the 80’s. They also have cool and energy efficient globes

With the latest innovations in technology, ceiling fans with an led light are quickly becoming the standard choice. A ceiling fan with a remote allows the convenience of controlling the ceiling fan or the light at any location within the remote control’s range.

Change the Direction of Your Ceiling Fan

However, ceiling fans aren’t just a one-season wonder. You can also reverse them during the winter, which forces warm air down from the ceiling, helping you make the most of your heating costs.By using your ceiling fan in winter mode, this reverses the direction of the fan, blowing towards ceiling, circulating warm air at the top of the room throughout the room without creating a draft on the occupants.

DC ceiling fans can go up to seven speeds including reverse.
Reverse air drives warm air downwards and this helps in the cooler months to push warm air down.
If your fan can’t go in reverse, you may find one of the slowest normal speeds works well for you in winter by driving warm air down from the ceiling without creating a significant draft effect.